Balloon scare tactics and a free cat to a good home...

During the past weekend, I've been on a writing jag.  Now please understand that prolifc wordsmithery like this does not often occur for evil scientists preoccupied with world domination.  We have a lot on our electromagnetic plates you know.

And in the process of writing, I do a lot of researching...okay I confess, a little on-topic internet surfing and a whole lot of following completely unrelated links through wikipedia.  Not important--the point is, I'm writing some creepy stuff over here.  A lot of it has to do with a very old cemetary that I've spent hours pouring over maps, pictures, reading through stories, etc.

Now when I finally hit the hay, it's usually in the wee hours of morning, a very dark and silent time in the house.  Everyone's asleep, you can hear breathing  and the faint buzz of the kitchen light, so you can picture it, very eerie and quiet like.

The past couple of nights, I'll turn out the lights and head upstairs.  I do my usual routine, poke my head in and check each of the boys and then tiptoe into the absolute blackout of my room, trying to be as stealthy as possible, because Shad normally wakes up if a spider scratches its ass in the next room.  The problem is this evil balloon the boys brought home a few days back:

Yes, that's the one.  It keeps scaring the crap out of me.  It's got a weight on one end and seems to move about the house on it's own--never in the same place twice.  The first night, I walked up the stairs in the dark poked my head into Liam's room, saw he was sleeping, turned around...and saw a dark shape floating in mid-air.

I squeaked, jumped backwards into Liam's room, flipped on the light, and realized that it was the stupid balloon.

Now you think I'd have to be pretty dim to make the same mistake twice.

But the next night, I'm about to go upstairs, when I glance down into the pitch black living room and see this glint of light reflect and vanish, like something had just moved.  So I take a deep breath, and walk down to the lower level, my hand on the wall ready to flick on the light, and as I'm squinting to see what it could be, I see this solid black shadow, floating, moving.  I gasp, flip on the light and....it's the damn stupid awful balloon, again.  Just floating there, turning very slowly because a heater turned on or something.

Last night, I'm again walking up the stairs.  I check on both of the boys, and then walk in to the bathroom, deciding not to turn the light on.  Again I'm confronted with the dark, floating apparation, and for a half of a second, maybe less, my heartbeat speeds up.  Then I remember, ahhhh, the stupid balloon, you won't get me this time buddy.

At the exact moment, the dark shape plunges downward  and then pops up right in front of me, and I shriek and stumble backwards and as I'm trying not to fall on my rear, something attacks my foot viciously, and while whining, EEE! EEE!  EEE!  and trying to shake the evil attacker off my foot, I reach down to swat it off, and my hand hits...fur.

God, I hate that cat.  Just hate that cat.  She was hiding out in the dark bathroom, probably waiting for me.  She went after the balloon first and then my foot.  The only thing that saved her from being kicked into a wall was that I was still thinking logically enough to assume that the thing might turn around and attack me somwhere else, and in the dark, I wouldn't be able to see it coming. 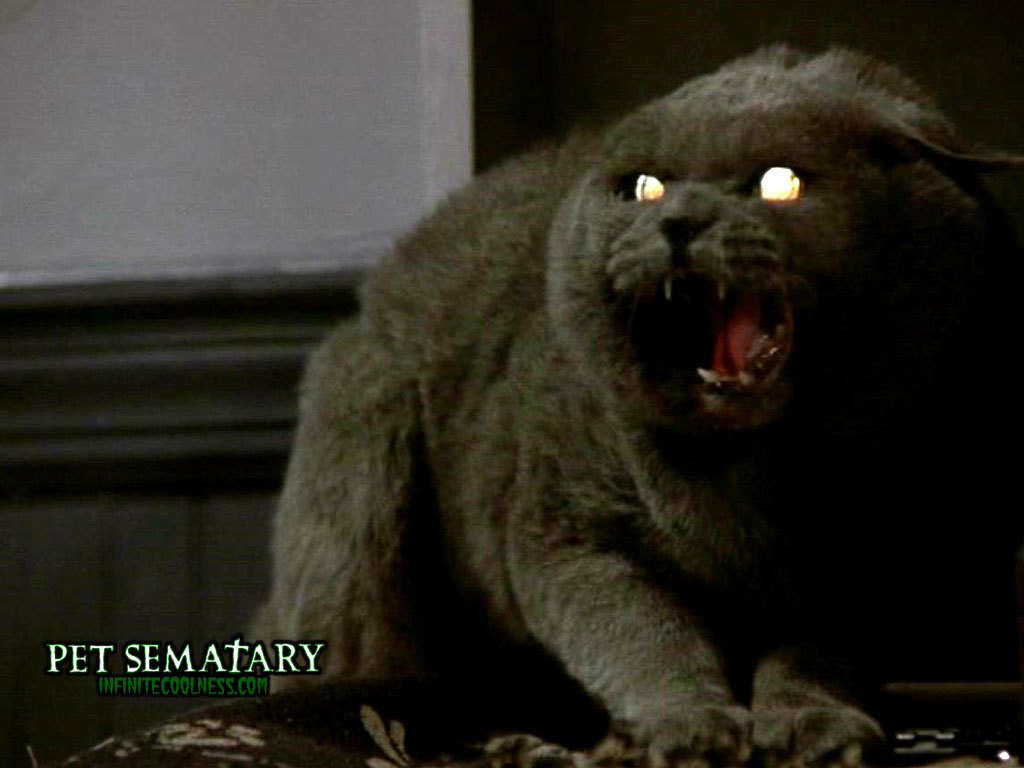 Loving and wonderful cat available to a good home.

The balloon has since lost it's string and is now stuck up on the kitchen ceiling, but the cat is still lurking somewhere...plotting, biding it's time.  I really wish I could sell the kids on the virtues of dog ownership.

Oh and by the way...Shad...mighty man, protector of the household and self-proclaimed light sleeper? Yeah... didn't even stir.  I'm being attacked by a balloon with bad intentions and a possesed cat and struggling and shrieking and he hears nothing.  Definitely thinking about getting a dog.