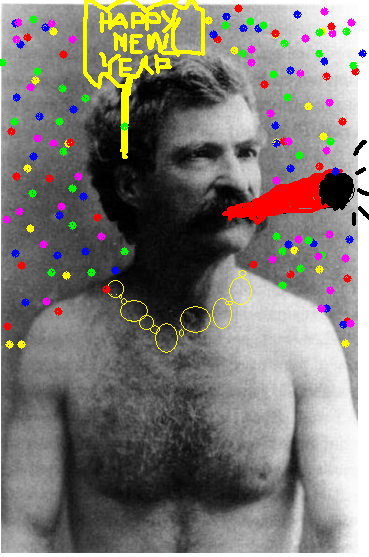 New Year's is a harmless annual institution, of no particular use to anybody save as a scapegoat for promiscuous drunks, and friendly calls and humbug resolutions. -Mark Twain

Well, here we are again, the end of another year.  Something about the depressing days following Christmas, when we feel like a balloon with all the air let out, makes us want to do something.  To somehow beat that crappy end-of-year feeling by swearing: Next year's gonna be my year, damnit!  I'm going to do... stuff.  I'm going to get all hot and skinny, and uhhh... quit smoking, and eat green leafy vegetables.  I'm going to go the gym...every freakin day.  I'm going to start looking for a better paying job.  I'm going to go to college.  I'm going to move out of my parents basement.  I'm going to stop paying hookers to- well, you get the point.  Normally, my New Year's resolutions revolve around the things I'm NOT going to do again.  I'm not going to quit smoking... you can got to jail for ripping people's faces off.

However, it appears that even brilliant evil scientists (such as myself) can, on occasion, see certain ways in which they may become even more awesome and all-poweful.  To that effect, I give you:

1. USE OBSOLETE WORDS LIKE "YOU LOOK MALAGRUGROUS TODAY!" OR "WHAT A JOLLUX THAT DUDE IS!"  ALL THE FREAKING TIME! (and then buy the words with google adsense and when people run to google it, have it come up like "Haaaaa! This is Kris. You were pretending you knew what it meant, but you didn't and I knew you didn't.")

2. FIND NEW NEMESIS!!!! (This is really important.  I haven't had a real nemesis since Jimmy, and the gaping hole left by not having an arch rival... well, you do what you can to fill that hole.  Some people drink, some people work out compulsively.  I cry when I'm alone.)

3.  SUCKER PUNCH STRANGERS!!!!! (I can't even take credit for this kind of brilliance.  It's another one of Mark Twain's ideas: "If a person offend you, and you are in doubt as to whether it was intentional or not, do not resort to extreme measures; simply watch your chance and hit him with a brick. That will be sufficient."

5.  TAKE OVER THE WORLD!!!! (I know, I know, I make this one every year, but part of being an evil scientist is being defeated over and over and over again,yet never becoming disillusioned.  Think about it.  Take a look at the Legion of Doom.  They were always coming up with new plots to thwart the Superfriends.  Did a single one of those plans ever work?  No.  But did you ever hear Lex Luther or Bizarro say "You know what, let's just stop.  Let's just give up and admit that the Superfriends are always going to win.  I guess I could be an investment banker...")

Reply scotty
2:43 PM on February 3, 2011
do you have an arch nemesis yet?.....what is the job description? what qualifications are required?.....never been one before but always prepared to broaden my horizons....(i dont have to wear spandex do i? that would just make people laugh.....well maybe i could hahahaha)

Reply ★ Owner
10:04 PM on February 3, 2011
LOL, I actually have not found a new nemesis yet! Wearing spandex would really be giving 110%! I've only had one great arch nemesis in my lifetime. He was extremely prissy and the most passive aggressive person to walk the face of the earth. He was always in a terrible mood, probably made worse by my continual plotting against him. You would probably have to hang around me a lot and tell me how awful I am at doing stuff, and complain a lot about my slide making and staining techniques. You would also have to have an entire collection of annoyed sighs that you do one after the other whenever anyone tries to talk to you. Again, I've only had one arch nemesis, so I don't have a lot to go on.