The Coolest Trick to Impress Druken Friends at the Bar that the World Has Ever Known!

Every once in awhile, the pressure to use my amazing amount of awesomeness to do something good for mankind gets to me... and I crack.  This does not happen often, so pay attention.

I'm about to tell you how to make drunk people think you're the coolest person that they've ever met.

Step one-- you have to smoke.  Not just because it makes you look cool (face it, even if you're a badass to begin with you look twice as cool smoking a cigarette.)

But also because it's necessary to make this trick look completely unplanned.

Second, find a way to turn the conversation to scientific principles.  It isn't hard when everyone's been drinking-- "Yeah, I know, Denise looked really hot in that miniskirt the other night.  Hey-- you know what's super cool? Gravity!"

Third-- and here's where it gets technical-- smoke your cigarette to the butt.  Now, pull out your cigarette pack and you know the cellophane that covers the bottom portion of the pack?  Pull this out so that there's about an inch of space between the bottom of the pack and the bottom of the cellophane wrapper, this is now a vacuum.  Lay the pack on it's side.  Now, using the cigarette, touch the ember lightly to the top of the cellophane wrapper, burning a tiny hole.  Put the cigarette butt out in the ash tray, and remove the paper from the filter.  Roll the paper tightly and use it to plug the hole you just made in the cellophane.  Next, use a lighter to light the rolled paper on fire where it sticks out of the hole.  Blow the flame out quickly.  Finally, watch the amazement on your friends faces as the smoke cascades down in a waterfall and pools at the bottom of the cellophane, because all things, even smoke, falls due to gravity when there's no air to hold it up. 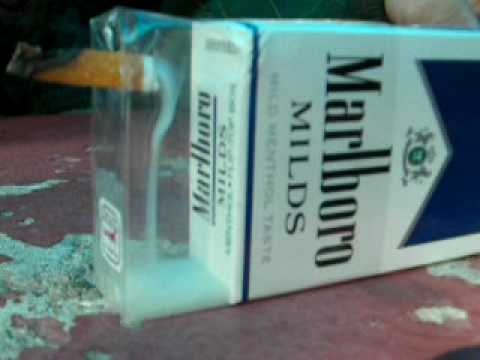 Now, bask in the adoration of drunks, and don't say I never did anything for you.

Reply [email protected]
8:44 PM on September 12, 2011
Just tried that out a few weeks back after seeing it on a different post. I did indeed look like quite the magician.